A big part of the support we provided for the $10aDay campaign involved building a strong campaign identity.

With origins in the world of academia and public health, $10aDay’s messaging was often very technical and policy-focused. We helped them refine their messaging to make it more digestible and easy to understand. We helped build a narrative that informed British Columbians about the crisis, told the story of those impacted, explained the contributing factors, and how the $10aDay Plan is the solution to BC’s child care crisis.

We worked with the $10aDay campaign to establish a strong visual identity through the design of a versatile campaign logo, and development of new visual identity and brand guidelines. We crafted an action-oriented website built to communicate their key messages, drive engagement, and build relationships with their supporters. Throughout the course of the campaign, we helped manage their email blasts, social media, and other outbound mass communications, ensuring a consistent voice and message across all of their digital communications streams. 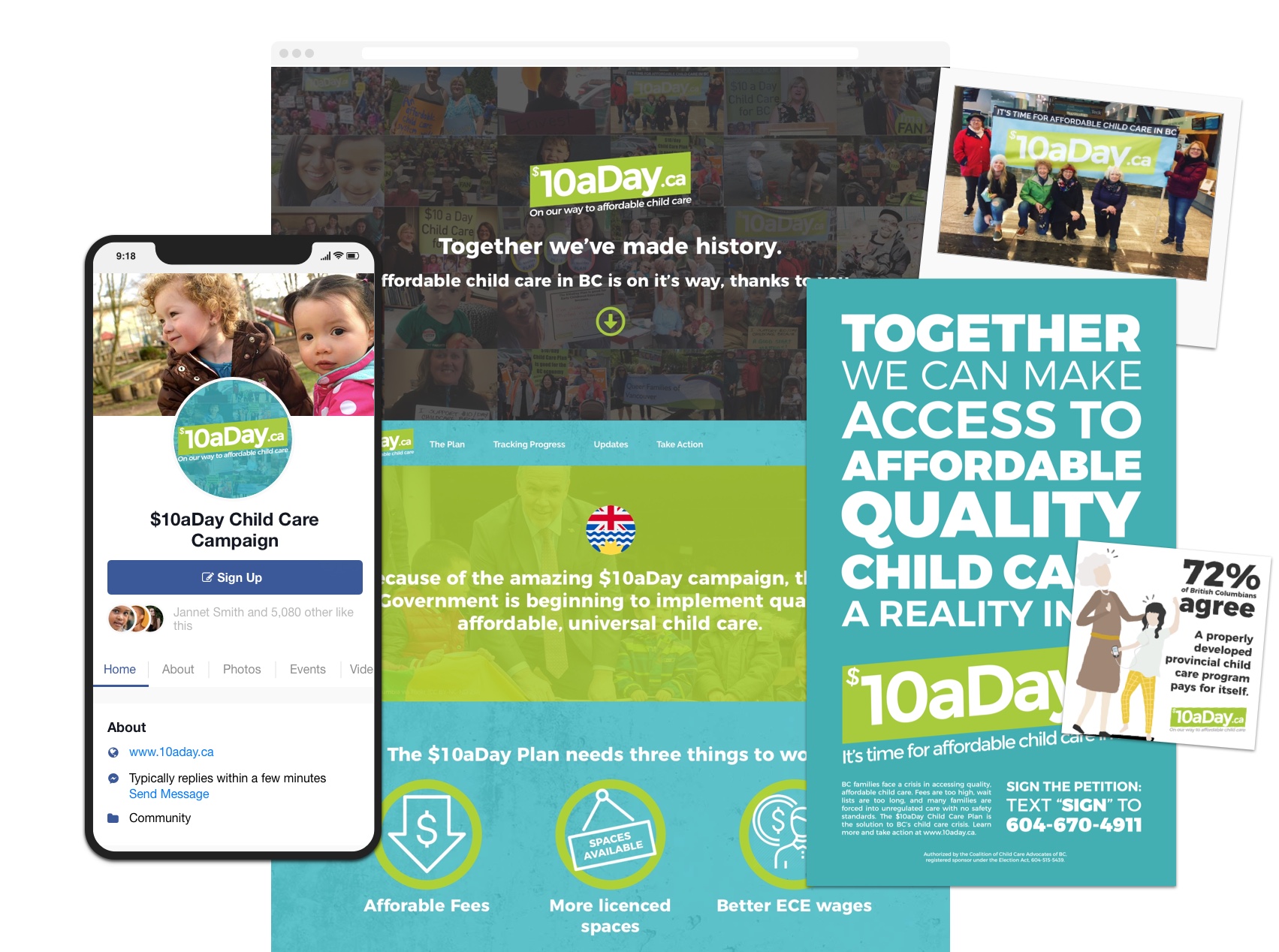 For example, NationBuilder’s integrated website management tools meant that actions taken by supporters on the $10aDay website or on social media are automatically logged and tracked in NationBuilder. This allowed $10aDay to build a detailed profile for each of their supporters and track engagement on a supporter-by-supporter basis, while at the same time gathering “big data” to evaluate progress, inform decision making, and adjust strategy throughout the course of the campaign. NationBuilder’s advanced filtering and targeting tools meant that we could help $10aDay effectively segment their audience to tailor communications to better build relationships with supporters.

We supplemented $10aDay’s digital strategy with the use of other tools too. For example, using NewMode’s campaign engagement toolset helped us facilitate $10aDay supporters in sending letters to the editors of their local newspapers, and send messages of support for the $10aDay Plan to their local elected officials. These tools helped us amplify the voice of those living with BC’s child care chaos.

Another key part of $10aDay’s digital strategy involved amplifying their social media presence through Facebook paid advertising. Using Facebook advertising meant that we could target audiences most likely to convert to supporters in strategic geographic regions, and maximize our impact on a minimal budget.

“Van City Studios has made a significant difference to the success of the $10aDay campaign in British Columbia. Their digital skills provided a boost to our outreach and subsequent levels of visibility and support.”
Sharon Gregson, $10aDay Child Care Campaign

The strength of the $10aDay campaign resulted child care being a key election issue with broad public support during the 2018 provincial election. Polls showed that support for $10aDay child care grew consistently over the course of the election period, ending with a majority of British Columbians wanting their new government to implement $10aDay child care.

While only the BC NDP officially committed to implementing the $10aDay Plan, the visibility and broad public support for $10aDay child care resulted in all three major parties committing to making some form of significant investments in child care — another huge victory for the $10aDay campaign.

The BC NDP won the election, and has taken bold steps to address BC's child care crisis.

“We plan by year five to have 66,000 new spaces and the $10-a-day plan, which has been advocated not by me, not by Greens, not by Liberals, but by child care providers and advocates who have been working on these issues for a decade. I believe it’s a plan that can work, and we’re going to implement it.”
John Horgan, Premier of British Columbia